“Hello, my friend. Come and sit down,” is the familiar greeting many of Cleveland’s homeless hear from the team of St. Vincent Charity Medical Center physicians, residents and students, participating in the annual Homeless Stand Down. The team is there to provide care for the primary of mode of transportation for the homeless—their feet—however, the greatest gift they give the 1,500 attendees is dignity.

Since the inception of the Stand Down in 1990, members of the St. Vincent Charity’s Department of Podiatry have volunteered to serve and provide medical screenings at the annual event for Cleveland’s homeless. The screenings begin with the washing of the feet of the men, women and children who come to Public Auditorium seeking medical care, food, clothing, respite and other necessities.

“As a Catholic, mission-driven hospital, I am always struck as I begin to care for each attendee of the image of Jesus washing the feet of his disciples, which symbolizes the humility and charity of Christ,” said Dr. Michael Canales. 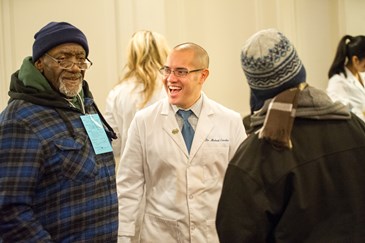 “As we treat each attendee, this image reminds us of our call to service and the need to look at them not only as patients, but as members of the human race.”

The Stand Down falls at a time for many of Cleveland’s homeless that marks the lowest point of the year. The Christmas season, which provides many opportunities for meals and assistance, is over and the season’s worst weather is upon Northeast Ohio. “We stand in the gap of services for a lot of people. Beyond the medical treatment we provide, sometimes it is simply respecting the dignity and value of each person, talking to them, giving them hope that provides the greatest relief,” said Dr. Canales, who has assisted with the Stand Down for 12 years.

Dr. Canales’ most striking memory from the Stand Down was a young woman who was homeless as the result of an abusive relationship. The woman shared with Dr. Canales how lonely she was after the holidays and her daily struggles moving from shelter to shelter.

“We saw her at her darkest hour.  While she did not necessarily need medical treatment, I talked with her for about 15 minutes, just as another person, trying to give her strength and hope.  I gave her my card as she left in case she needed anything in the future” Canales said.

Several years later, the woman returned to St. Vincent Charity, still with his card in hand, seeking medical treatment.  “She expressed how life-changing our conversation was.  Since we met, she had turned her life around and was literally back on her feet. Simply extending the hand of humanity helped her change her life.  It was uplifting at both ends – for her and for me,” he said.

Third-year resident Dr. Erin Younce, who assisted Saturday with the event for her third year, said participation in the Stand Down is an important element of their medical training and education, helping them to embrace the 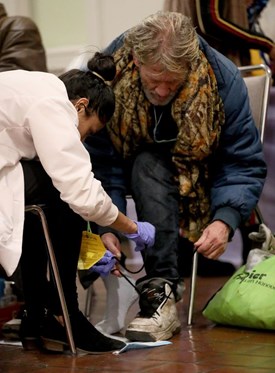 value of mission-based care. “Participating in the Stand Down changes our perspective about homeless people. There are many misperceptions, but these are simply men, women and families who often still have jobs, but just don’t earn enough to have a place to live. Seeing them, treating them and talking with them opens our minds and gives a better sense of humanity,” she said.

In addition, the event provides practical clinical experience for the residents and students. Due to the time the homeless spend on their feet – on average more than 5 hours per day - their exposure to the elements and lack of access to adequate socks, shoes and hygiene facilities, the vast majority experience some form of foot and health issues, many of which are life threatening.

“The feet are a window into a patient’s health.  We can quickly see the obvious foot issues, such as an infection or fracture that causes immediate distress. However, by looking at the feet we can also see systemic issues such as peripheral neuropathy, alcoholism, circulation, diabetes, that we can refer them for further care at local clinics and, in some cases, the ER for treatment. This assessment can often save their lives,” Dr. Canales said.

Leading during the COVID-19 pandemic, Janice G. Murphy put her faith in God

It is a very scary disease. It was unbelievable, the strain that it put on our entire staff. But the beautiful sense of strength and camaraderies that we created here, that was something to behold. And I will always be grateful that I was able to be here, and to lead through it. The people who lived through this are never going to forget it, or the people they worked with.
Read More

Technology, confusing distribution plans and limited supply have made it frustrating and difficult for many seniors to secure a COVID-19 vaccination. Those who are homebound, live alone, lack transportation or reliable social connections are at an even greater risk of not receiving the vaccine. Understanding these barriers, Cleveland Clergy Alliance and St. Vincent Charity are working together to ensure Cuyahoga County seniors have access and transportation to COVID-19 vaccinations.
Read More

St. Vincent Charity Medical Center has undergone an immense amount of structural and organizational change during its 155 year history. Yet, throughout each period of transformation, Holy Trinity Chapel has remained a sanctuary for caregivers, patients and visitors of St. Vincent Charity. Celebrating the 90th anniversary of its dedication, the chapel continues to support, energize and unite those who walk through its doors.
Read More