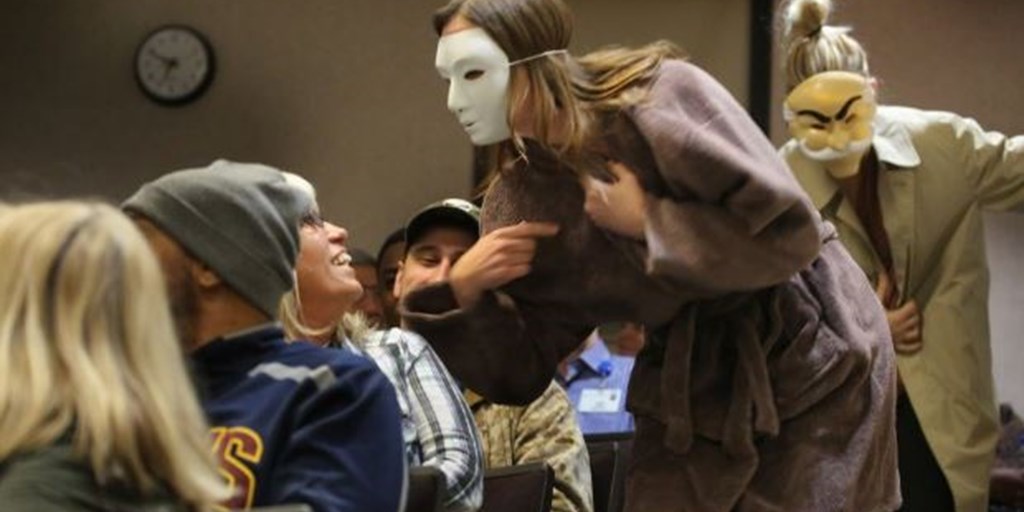 Cleveland’s Plain Dealer joined addition treatment caregivers and clients of Rosary Hall this week to view a dramatic performance staged by the Improbable Players. The professional troupe brings a raw, riveting message about addiction to schools and stages across communities hit hard by the opioid epidemic.

The March 25 performance at St. Vincent Charity Medical Center was the first appearance in Ohio by the Improbable Players. The group was founded 35 years ago in Boston and now consists of touring troupes in New England, New York, New Jersey and now Cleveland. The Cleveland troupe consists of a seven-member ensemble that just started last year and staged its debut performance at St. Vincent.

All players in the ensemble are recovering addicts who bring years of painful, personal experience to their dramatization.

The following front page coverage of the performance at St. Vincent Charity Medical Center was published by The Plain Dealer on March 28: 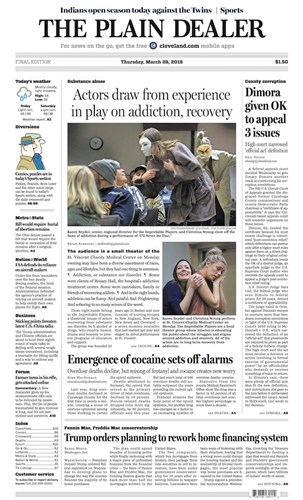 By Brian Albrecht, The Plain Dealer

CLEVELAND, Ohio – The audience in a small theater of the St. Vincent Charity Medical Center Monday evening may have been a diverse assortment of races, ages and lifestyles, but they shared one thing in common.

Addiction, or substance use disorder.

Some were clients of Rosary Hall, the hospital’s addiction treatment center. Some were caretakers, family or friends of recovering addicts.

And in the right hands, addiction can be funny – at least when it comes to misplaced stereotypes. And painful. Sad. Frightening. And sobering in so many senses of the word.

Those right hands belong to the Improbable Players, a theatrical troupe of actors recovering from substance use disorder, be it alcohol or drugs, who employ humor, drama and honesty to present programs of education and support.

The group was founded 35 years ago in Boston and now consists of touring troupes in New England, New York, New Jersey and Cleveland – a seven-member ensemble that just started last year and staged its debut performance at St. Vincent.

The Improbable Players’ mission statement is: “To set the stage for prevention by educating the public about addiction and recovery through dramatic performances and theater workshops – presented by actors who are in long-term recovery from addictions – that help people recognize situations in their own lives and seek the help they need.”

Performances of four plays are held in schools (from sixth grade up), treatment centers, conferences and community events. The nonprofit group charges a fee based on the type of program presented.

The plays have a common theme, according to Karen Snyder, a Wooster native and Ohio regional director of the Improbable Players, who performed with the Boston troupe and brought the concept to Northeast Ohio when she moved back here.

“The common theme is substance use disorder and reaching out for help when you know that you can’t do it anymore,” she said.

“Also prevention education,” she added. “These stories are about people who have gone down the road of addiction and alcoholism, and we want people to know that they don’t have to do this.”

The group is called the Improbable Players because “it’s unlikely we’d be here today, given where we came from a few short years ago,” according to Snyder.

A theatrical presentation is an effective way of getting their message across, Snyder said.

Monday’s play, “I’ll Never Do That,” told the story of a family coping with a mother’s descent into alcoholism and eventual recovery.

Murmurs of recognition and nods of remembrance swept through the audience at certain scenes or lines such as, “I can quit anytime. I just. Don’t. Want. To.”

Or, “she’s not an alcoholic, she just drinks too much,” drew a sad chuckle.

A knowing “mmmmmmm” arose when the son in the play accidentally dropped a pack of drugs, exposing his addiction.

During a question-and-answer session following the performance, one woman in recovery asked how she should handle family members who were still using drugs.

Cast member Christina Strong, in advising the woman to keep her distance, offered a familiar adage, “you hang around the barber shop long enough . . .”

“You get a haircut,” the audience chimed in.

Each cast member told their personal story of addiction and recovery.

Snyder recalled hitting bottom with her drinking addiction in Boston. “I knew I couldn’t keep living the way I was living. I knew I was going to die," she said. "I had two family members that were in recovery, so I reached out to them, and getting sober has been a real blessing for me.”

Actor Connor Drake also noted, “Sobriety has just been asking for help, over and over and over again, and it could be really annoying, but it’s incredibly rewarding.”

The fact that the actors shared a bond with recovering members of the audience was one of the characteristics of the Improbable Players that prompted Orlando Howard, Rosary Hall director of outpatient treatment services, to invite the troupe to perform.

“Also the fact that they are very interested in reducing the stigma associated with alcoholism and drug addiction,” he said. “I thought this would be a wonderful idea for not just our clients here at St. Vincent Charity Medical Center, but also our caregivers here.”

Howard said their clients could benefit from that night’s play in gaining “a better understanding that they’re not alone when it comes to how alcoholism affects the family, because that’s what this play is about.”

Two of those clients, who preferred using only their first names, also believed the performance could help people in recovery.

“They were awesome,” Pamela said regarding the Improbable Players. “They brought back a lot of memories when I was using, and some of the things that I went through.

“It’s very emotional, and at the end it was very happy,” she added. “I was very happy at the end because everybody had found recovery and they’re doing great, and that’s where I am at in my recovery.”

She also liked how the play showed “the way other family members, they suffer and go through the hurt and the pain as well.”

And she thought the performance would encourage people who know someone with a substance use disorder to “reach out to them, and let them know that there’s help out there.”

Marnette said, “I thought it was beautiful. It hit a lot of feelings, you know, when I was growing up, the confusion in the home, the alcoholic parents. I can identify with it all.”

Orlando Howard was pleased with the results.

“What I learned from this play were a lot of people that became friends through their substance abuse disorder,” he said. “And when I think of the word friends and Improbable Players, I think of this – friends are angels who lift us to our feet when our wings have trouble remembering how to fly.”

Rosary Hall at St. Vincent Charity Medical Center in Cleveland has been at the forefront of treating alcoholism and drug dependency for more than 60 years. At Rosary Hall, patients and their families find the road to freedom in a recovery process that’s compassionate, comprehensive and one of the best in the country. In fact, Rosary Hall is the only addiction treatment center in the region to provide a full spectrum of the most current treatment options, from hospital detoxification to community-based rehabilitation, to the latest medication-assisted treatments.

To reach Rosary Hall, call 216-363-2580 and press 4 to speak with a caregiver immediately. Learn more about our co-medical directors, Dr. Ted Parran and Dr. Christopher Adelman.