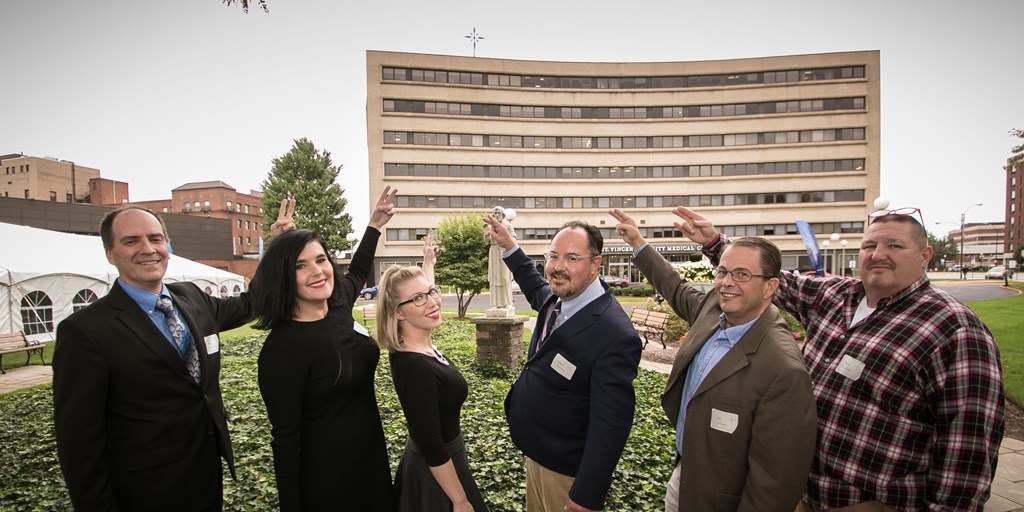 More than 100 friends, supporters and caregivers gathered September 27 at St. Vincent Charity Medical Center for the Feast of St. Vincent de Paul Mass and Donor Reception. Auxiliary Bishop Emeritus Roger Gries, OSB, presided over Mass and gave the blessing at the reception that followed on the hospital’s front lawn.

Guests enjoyed hors d’oeuvres and drinks at the reception, and heard from a number of speakers. St. Vincent Charity Chief Development Officer Tim O’Callahan opened the remarks by welcoming everyone and talking about the 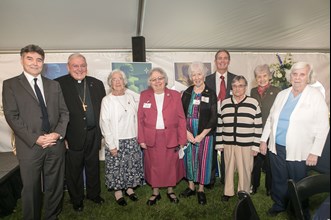 importance of donors and the mission of the hospital.

“I am always humbled by the generous support we receive. The quality of care is second to none and that support is  important as we serve some of the most vulnerable in our community,” said O’Callahan.

In his blessing, Bishop Gries talked about the more than 400-year legacy of St. Vincent de Paul, the namesake for the event whose contributions to the training of priests and organizing parish missions and other services for the poor helped shape the Catholic Church's role in the modern world.

“St. Vincent Charity Medical Center is a place where we can find St. Vincent de Paul in the way we care,” said Bishop Gries. “Bless those who serve, bless our donors and bless all of us, because we truly thank God for the gift that has been given to us.”

Dr. David Perse, president and CEO of St. Vincent Charity, followed and thanked the sponsors for the event before presenting awards to three caregivers for their servant leadership. He presented Joseph Sopko, MD, chief medical officer, with the Physician of the Year Award. He presented the Nursing Excellence Award to Mark Kiplinger, a nurse in the cath lab. 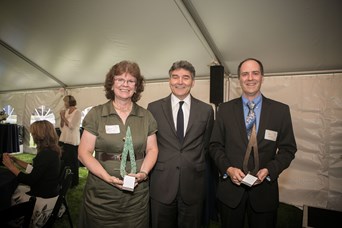 Dr. Perse read some of the remarks Kiplinger’s fellow nurses submitted as part of his nomination. They included: “He  treats every patient who comes here as if they are his mother, sister or brother.” “A shining example of this faith-based organization.”

The final award was presented to Liz Moro, who is nurse manager for the St. Vincent Charity Medical Center Outpatient Oncology/Infusion Department. She received the 2018 Radiant Spirit Award for her dedication and selfless service to those around her. The award honors individuals within the St. Vincent Charity community who live lives of quiet dignity, service to their fellow human beings, heroism, generosity of spirit, warmth, leadership, care and love.

In presenting her with the award, Dr. Perse said, “I thank you for all that you do and all that you have given. It is my distinct pleasure to recognize you with the Radiant Spirit Award.” As he wrapped up his remarks, he said, “These three people give you a sense of the quality of people at St. Vincent Charity.” He also thanked donors and supporters for their partnership. “Every gift impacts the quality of care,” he added.

Former patient Jonathan Petrea closed the remarks with a testimonial about his experience with St. Vincent Charity and a demonstration of the “St. Vincent kiss.”

At the age of 43, Petrea was attending a concert in downtown Cleveland when he broke out in a cold sweat and “felt a little woozy.” He was afraid, so he called 911. He could tell it was serious by the look on the faces of the EMTs, who told him he was having a heart attack.

While he said he smoked and was overweight, he couldn’t believe he was having a heart attack. He told the EMTs, “I have another 15 years before I should have health issues.” 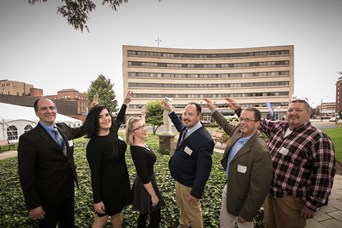 The EMTs told him they were taking him to the St. Vincent Charity Medical Center. “That’s when the negotiations

began because I didn’t know much about St. Vincent Charity. They won the negotiation and I’m so glad they did.”

He was treated by a team of caregivers, including cardiologist Dr. Ramesh Brahmbhatt , who he said provided top- notch treatment. More than year after his heart attack, Petrea has lost weight and  is making healthier lifestyle choices. He extolled the virtues of St. Vincent Charity after telling his personal story.

“This a wonderful culture and reflects the spirit of the sisters. When my father had a quadruple bypass and other health issues, other hospitals treated him like a number. Here, I felt like a VIP and I know everyone else was being treated the same,” said Petrea.

After speaking, Petrea had everyone at the reception turn to look at the hospital building and blow a kiss, something

he does each time he drives past the hospital. It’s what he calls the “St. Vincent kiss.”