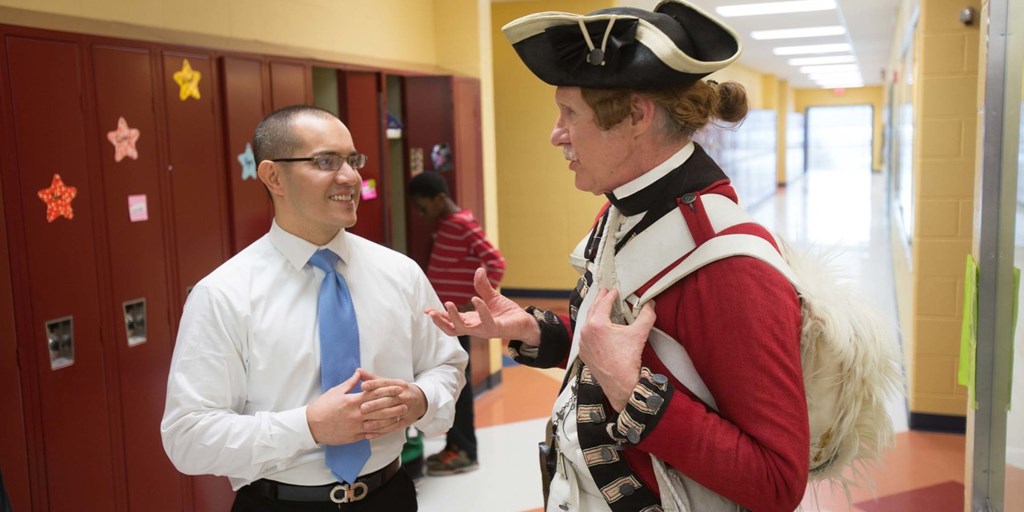 Dave Zeih is a character—literally. A retired history teacher, Zeih now spends his days doing presentations portraying a British soldier in the American Revolution. He performs for schools, libraries and civic groups for crowds of all ages. His presentations keep him in touch with his passion for education and shaping young minds.

But with a lingering ankle injury flaring up, it looked as if the curtain would close on Dave’s performances. With the help of Dr. Michael Canales, foot and ankle surgeon at the Spine and Orthopedic Institute at St. Vincent Charity Medical Center, this soldier was saved.

Throughout high school and college, Zeih was a track and field athlete. After years of wear and tear, he began suffering debilitating ankle pain in 2010 from frequent sprains and arthritis. With every step he took Zeih never knew how his ankle would feel when it landed.

“The kids at my presentations would say ‘How come you’re limping?’ and in character I would have to answer ‘Oh, I was hit in the leg with a brick thrown by one you colonists the other day and it hurts!’” he said.

When he first came to see Dr. Canales he was experiencing steadily increasing ankle pain and instability that was affecting his ability to exercise, walk his dog and, most importantly, participate in his educational reenactments. After X-rays, non-operative treatments and further examination, it became clear to Dr. Canales that Zeih needed—and was the perfect candidate for—total ankle replacement.

A fairly new procedure, total ankle replacement was developed as an alternative to ankle fusion—the most common surgical treatment for severe ankle arthritis. While still a reliable procedure today, consequences of ankle fusions include premature arthritis and pain of the surrounding joints due to eliminating ankle motion, according to Dr. Canales.

“Total ankle replacements were initially developed in an effort to preserve some degree of normal motion that is lost in a fusion,” said Canales. “Today, there are devices that allow resurfacing of the ankle joint similar to the knee joint. The ankle joint is not necessarily taken out and replaced, rather it’s resurfaced with two metallic pieces sandwiching a plastic bearing.”

According to Dr. Canales, ideal candidates are generally in good health with painful ankle arthritis that has failed with non-operative treatment. Patients can expect to place full weight on their ankle around six weeks after surgery in a supportive boot or brace. From there, a rehabilitation program is implemented to maintain healing and improve balance, strength, agility and posture over the next six to 12 months.

After undergoing total ankle replacement in October 2013, Zeih is back on his feet and has returned to his active lifestyle free of pain. Over a year later in March 2015, Dr. Canales was able to see just how far he had come in his recovery when he sat in on of his elementary school presentations.

“It was extraordinary to see Mr. Zeih in his element and to know that the care that we delivered at St. Vincent Charity had a hand in that,” said Dr. Canales. “Looking at him, I see somebody who’s very passionate and very good at what he does and knowing that I played a small part in that is certainly gratifying—that’s why I got into the practice of medicine.”

“I feel like I don’t have to worry about how I am going to land when I step—which is what I used to think of all the time, previous to my operation,” Zeih said. “That’s a good feeling!”