Live from the OR, it's total knee replacement surgery 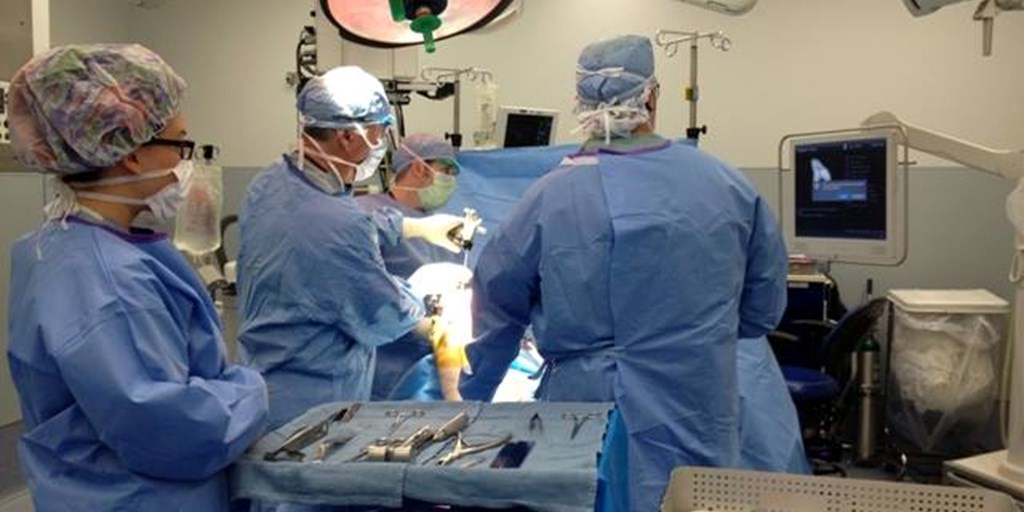 What happens inside the operating room during surgery? St. Vincent Charity Medical Center recently gave viewers the unique opportunity to see firsthand. In partnership with the Northeast Ohio Media Group—which owns The Plain Dealer, Cleveland.com and Sun Newspapers—3,874 people were tuned in to watch video, interact with the surgical team and follow along via Twitter as a patient underwent total knee replacement surgery.

After identifying our patient, 52-year-old John Favaloro, the Northeast Ohio Media Group was able to document through print, web, social media, photo and video, his journey from pre-surgical, surgical to post-surgical care. “New Knee, New Life,” coverage began on October 25, 2013, on Cleveland.com with an introduction to John’s story. Readers and viewers learned about his high school football injury, his military service and his eventual realization that surgery was the only answer to resolve the pain. Viewers and readers got to know John’s family and hear from Dr. Keppler as he planned the surgery.

Although typically a private person, John viewed this as an opportunity to help others learn about the procedure. “If it helps someone else, that’s a good thing,” he said. On November 19, 2013, the day of his surgery, John was even able to chat with another total knee patient in the surgical waiting area who had been following the series as a kindred spirit.

Identifying a surgeon who was able to articulate in plain language what he was doing was critical to the success of the venture. But John’s decision to allow cameras into the OR was the lynchpin that gave us the chance to educate more than 3,000 viewers who were tuned into his surgery as it live streamed on the homepage of Cleveland.com. In addition to the live broadcast, live tweets from the surgery were sent out from St. Vincent Charity’s Twitter account (@stvincentCMC). Viewers from as far away as Seattle followed along with live tweets, photos and videos from the operating room using the hashtag #stvknee.

“This was a great educational opportunity for people who may be considering knee replacement surgery and a first for Northeast Ohio,” said Wendy Hoke, Vice President of Marketing and Communications. “Viewers could ask questions in real time and become more familiar with what happens during the procedure. We even heard of watch parties for those who were considering the surgery.”

“Hopefully, people now have more of an appreciation of the surgery process and the incredible skill of our OR staff,” said Hoke.

Following a three-day stay in the hospital, John is now regularly attending outpatient physical therapy appointments and is looking forward to heading back to work after New Year’s. Thanks to our partners at the Northeast Ohio Media Group, Clevelanders are following John’s progress and wishing him well on his path to recovery.

Catch up on the entire editorial series and watch the video from the surgery at Cleveland.com. Or follow all the tweets and photos from the day on our blog.